Jim  has been in Aviation all his life.  From the age of 5, he was  passionate about building and flying.  In his early years he built a  variety of different model airplanes, from simple rubber powered designs to more advanced  gasoline powered models.  As a teenager, he progressed from model-building to restoring full-scale aircraft while developing a particularly strong  interest in soaring - especially Flying Wings.​

Grass Roots Experimentation: The XM-1 and Pioneer I

​At  the young age of 19, Jim built the XM-1, his first flying wing design  inspired by the works of Charles Fauvel and Al Backstrom.  After building several scale models he found the models of the un-swept, tailless wing concept to be superior in  performance and stability compared to conventional designs.

The XM-1, as its name implies, was designed and constructed as a research and development sailplane. Knowledge of aerodynamics came primarily from Jim's modeling experience. Structural knowledge initially came from a few aircraft textbooks before university aeronautical studies came a few years later and filled in many gaps.

Learnings from the XM-1 would lead to a series novel sailplane experiments. A fitting name was required to suit this series and eventually the name ‘Pioneer’ was chosen.   Thoughts of adapting a tapered wing planform had come into focus.  There were many advantages to a tapered wing, both aerodynamic and structural.  The Pioneer 1 became a flying laboratory for many further experiments.

With the success of the Pioneer 1, Jim built the Pioneer II with the intent to address the  needs of the amateur glider builder.  The Pioneer II had a more  simplified structure than the Pioneer I and had increased performance.   To date, approximately 35 Pioneer II’s have been built and many are still flying 50 years later.  Numerous design changes have been made over the years, but the Pioneer II ’D’ model has been by far the most successful.  Several early models are being displayed in various aircraft museums.

After the Pioneer II, one of Jim's personal goals was to re-live the experiences of the early days of gliding ,when flying was done in open, slow-flying Primary Gliders.  The concept of the Monarch Ultralight was initiated and developed into a viable, lightweight glider with real soaring performance - staying aloft for hours in weak thermals where all standard-type gliders were not able to soar.

In 1992,  Jim teamed up with John Roncz as  principal designers for the company Group Genesis to develop the  Genesis I aircraft.  In 1997,  Jim discovered a high quality  Carbon Rod that he had been searching for.  One that could increase the strength and  reliability of the wing spar and subsequently reduce overall weight.   Later that year, the Genesis Team built the Genesis II, the first aircraft to use Graphlite Carbon Rod in a production aircraft.  The prototype Genesis II flew in the fall of 1998.  All who flew the G-2 were favorably impressed with its handling and performance. Condenses from the cockpit were that it flew much like any conventional competition sailplane.  Twenty-seven of the  Genesis II's were built.

Many years had passed since the Pioneer II had made its first flight. There was an extended time period where progress of the Pioneer linage had nearly stopped.  It was time for a new Pioneer sailplane.  It was to have a lower drag airfoil, Schemp/Hirth  plug-type spoilers, all composite construction, automatic control hookups and a modern, attractive cockpit with adjustable rudder pedals.

The completed, tailless, Pioneer III aircraft is 100 lbs lighter than the wood wing of the  Pioneer II.  The Pioneer III enjoys a 20% reduction in wing drag over the Pioneer II resulting in an excellent sailplane that can perform exceptionally well  under weak lift conditions.  On its first attempt to soar under marginal  thermal conditions, the Pioneer III made a 5 hour flight.  On its  second flight, it easily flew a 60 mile, out and return trip, being careful to stay  within the parameters of the FAA flight test area.

Again, a promising new low-drag wing profile had hatched on Jim's computer, tempting the design of a new wing and the basis for a competitive racing glider.  To improve the high-speed end of the flight polar requires a higher wing loading. To increase the wing loading and keep the empty weight reasonably low, a higher aspect ratio is required.  Also, a hard wing to maintain surface perfection and its extended laminar flow is necessary.   A retractable landing gear, and the addition of water ballast tanks, improves its high-speed cruise performance.  Test flights thus far have been very successful. The photos of the Pioneer IV prototype under development are courtesy of Matt Kollman at Kollman Wings in Orient, Ohio USA. 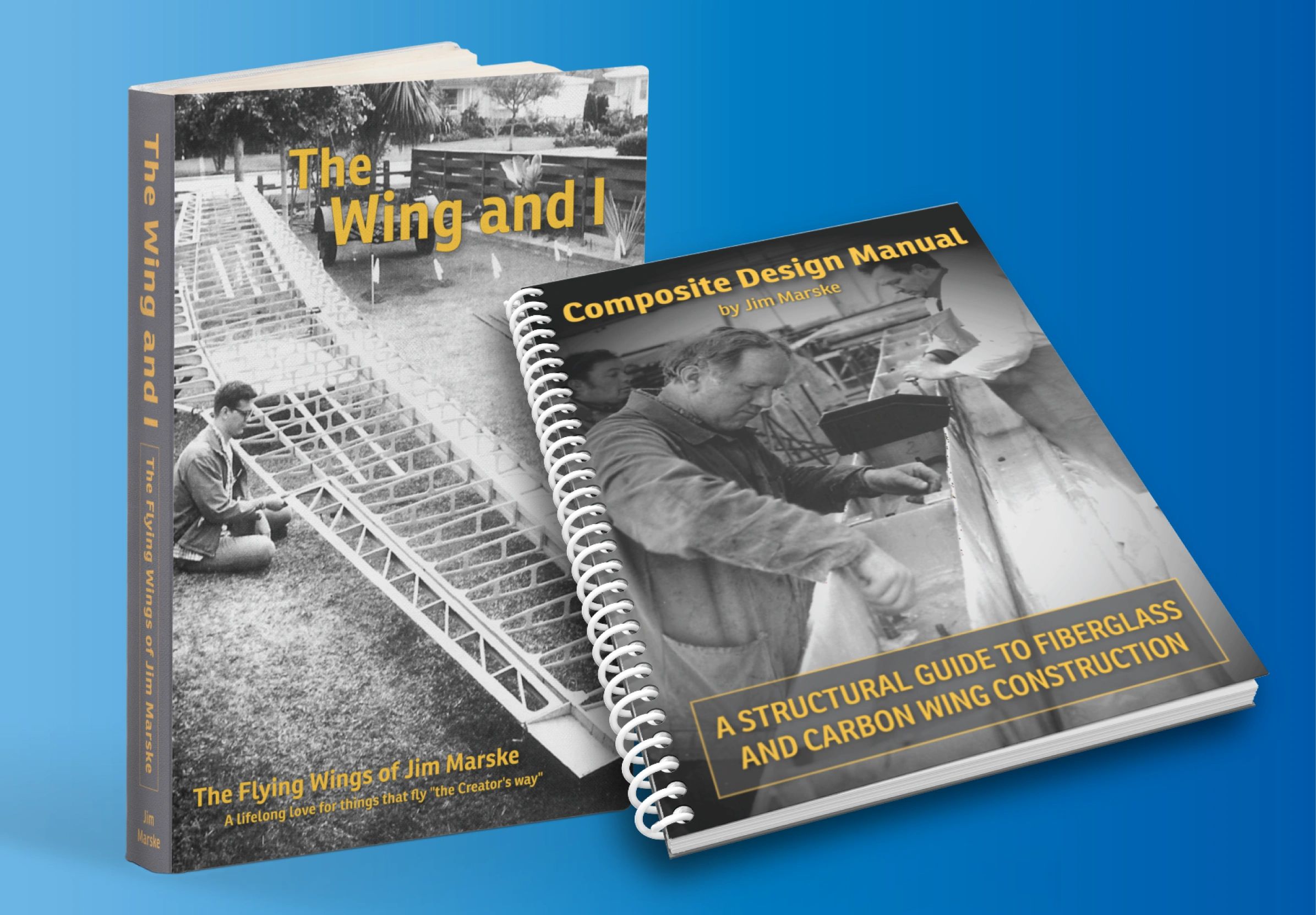 Informative, educational and entertaining books encompassing over 60 years of Jim's extensive work in Flying Wing design and construction. Discover unique content in Flying Wings and Composites not available anywhere else.

MARSKE AIRCRAFT BOOKSTORE
^Back to Top ^